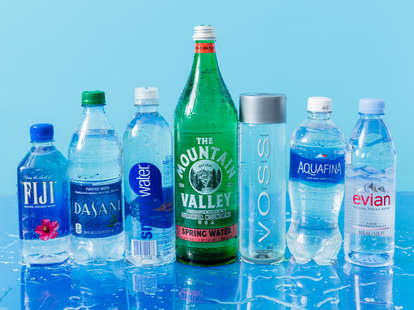 PHOTO BY COLE SALADINO FOR THRILLIST

Testing the differences between bottled waters is much like discerning the subtleties of shades of gray: It’s way more masochistic than sexy. But while the variations from one to another might not be as pronounced as those in the realms of mac & cheese or frozen pizza, distinct differences do exist.

To suss them out, we assembled a panel of ordinary citizens (no master sommeliers here) to blindly taste eight of the biggest bottled waters around: Aquafina, Evian, Mountain Valley, smartwater, Fiji, Dasani, Voss, and Pure Life. Read on to learn out which waters you should use to wash down your food, and which waters you should wash your hands with.

The story: The folks at Glacéau have their heads in the clouds. Their vapor-distilled water is pulled from the sky, then given electrolytes for taste. On the bottle they trash-talk spring water by making fun of people who like the taste of stuff that comes from under the ground. Snarky!

Tasting notes: Tangy. Tart. Reminds us of water that went through a Brita multiple times.

The story: Aquafina is purified water that goes through a seven-step HydRO-7 filtration process that it claims takes out way more solids than other filtration methods, making for the purest water possible. Foreshadowing!

Tasting notes: Starts off good, but the aftertaste wasn’t to our liking. It’s a voluptuous water. Very full-bodied. The cabernet of water. This tastes like American excess.

The story: The soda titans over at Coca-Cola own this purified-water imprint, which is remineralized with magnesium sulfate, potassium chloride, and salt.

Tasting notes: It feels buoyant in your mouth, which our tasters didn’t fully embrace. Very clean and fruity. Hints of unchanged Brita filter.

The story: Evian is “naive” spelled backwards, but it’s also the name of a town in the French Alps that was founded way before people learned about spelling things backwards to create secret messages. The company claims its water is a geological miracle because it passed through a few very scientifically unlikely permeable layers. Over the course of 15 years, rain and snow make their way into an underground spring where the water is harvested already full of electrolytes and minerals.

Tasting notes: Whoa, that’s a lot of minerals. The electrolyte levels are on overdrive. There is worry among the group about over-hydration. The texture is a little on the thin side. If this were a pair of jeans, it would be skinny, not apple-bottomed.

The story: Tropical rainfall on the island of Viti Levu in Fiji is naturally filtered through volcanic rock where it picks up minerals and electrolytes, then wells up in an underground aquifer.

Tasting notes: It’s got the most lab-created flavor, but by a meticulous scientist from an exotic land, not one of our sloppy, disheveled American brainiacs. There’s no aftertaste or lingering mouthfeel. So many minerals it’d pair well with rocks.

The story: Nestle owns 64 different brands of water, from Perrier to Poland Spring, but we tested its most popular: Pure Life. It’s classified as purified water, which means it comes from a well or municipal source and is then carbon filtered, softened, demineralized, re-mineralized, and disinfected with ultraviolet light and ozone.

Tasting notes: A clean taste, with no trace of minerals at all. Neutral in flavor. If you’re a marathon runner, this would be a great choice. It quenches in a very direct and pleasing way.

The story: Found in an artesian well in Norway and also in fancy hotel rooms, Voss ties Mountain Spring for the most expensive water on the list.

Tasting notes: This has a lot of character. It’s expressive. Gravelly, but we liked it — it’s the Jack Palance of water. There’s a roughness around the edges. It seems like there’s a ton of minerals in there.

The story: This Arkansas-sourced spring water has been quenching thirsts since 1871 and has been a favorite of everyone from presidents Coolidge and Eisenhower to Elvis Presley to Secretariat, who stands alone as both the first horse to take home a Triple Crown and first to have an opinion on water flavors. It takes 3,500 years for rain water to make its way to the aquifer and its naturally high pH supposedly works well to neutralize highly acidic food.

Copyright © 2022 Bourton on the Water